The DC Lottery is looking for a new executive director.

After more than three years on the job, Beth Bresnahan’s last day on the job was Friday, according to the Washington Times. The paper indicated Bresnahan filed her resignation last month, citing a family need that necessitates her return to Massachusetts “permanently.”

WAMU Analyst Tom Sherwood first reported Bresnahan’s departure. He added that she was scheduled to testify before a DC Council Committee on Business and Economic Development hearing on March 10.

The District’s CFO, Jeffrey Dewitt, reportedly was also slated to testify. However, he announced his resignation earlier this month to take a similar position at the University of Kansas. Sherwood tweeted Thursday that Dewitt’s final day in office will be March 9.

The DC Lottery operates sports betting in the nation’s capital. While Washington’s pro sports arenas and stadiums, as well as bars and restaurants, can partner with a sportsbook, only GambetDC, the lottery’s mobile app, is available across the District.

GambetDC is the platform developed by DC Lottery vendor Intralot. The DC Council narrowly approved a five-year, $215 million contract that the European gaming company received through a controversial no-bid process.

The council member, Jack Evans, who spearheaded the push for the sole-source contract eventually resigned after facing removal from the legislative body due to ethics violations.

The sole-source solicitation was challenged in court but allowed to stand.

The lottery’s sports betting operation has not been without its share of critics. One of the biggest complaints about GambetDC has been the odds its offers. For example, the table below shows odds at various sportsbooks for Saturday night’s NBA game between the Dallas Mavericks and the host Brooklyn Nets. 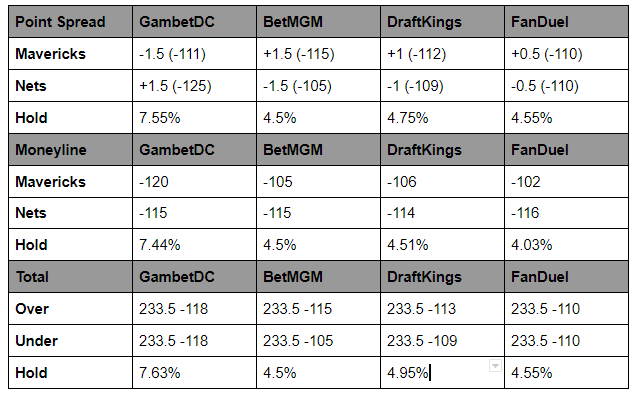 While the odds may not appear all that dissimilar, the table shows Gambet takes a significantly higher hold on the moneyline, total, and point spread than such operators as BetMGM, DraftKings, and FanDuel.

There currently is only one sportsbook operating at a Washington stadium or arena. That’s William Hill, which is located at the Capital One Arena. It does have a mobile app tied to it, but the app is only available within a two-block radius of the arena.

Despite that limitation, William Hill is still able to beat more prevalent GambetDC.

The post DC Lottery Executive Director Steps Down Prior to Council Hearing on Sports Betting appeared first on Casino.org.

The Star Entertainment Group Limited counting the cost of coronavirus